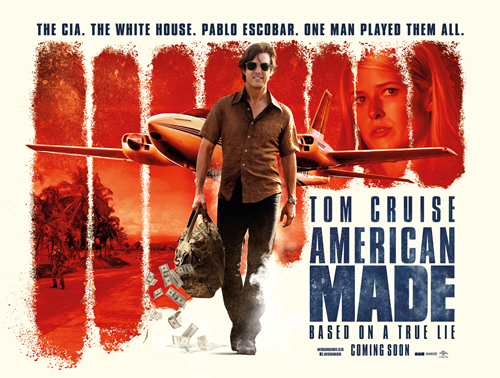 Doug Liman and Tom Cruise paired up together again for a fast-paced and colorful biography on Barry Seal. American Made may not have the blockbuster action but it holds up on its own firmly with the help of a great direction by Doug. Tom Cruise is definitely the main highlight of the film and he is what made it so entertaining.

The story: The pace is brisk; it takes the audience on a crazy ride from the start and never slows down. Though it never felt boring, sometimes I felt that it could have slowed down for some development. After the film ended, it seems that Doug and Tom had a clear mind on just keeping the audience as entertained as they can be. It cuts to the chase and never dwells on anything such as emotions. It moves quickly from event to event. Advantage is that I was not bored at all. Disadvantage is that it felt like a 2 hours montage on Barry Seal’s life. There is no real tension or character’s development. The realism is helped by the smart decision of filming like a documentary. Be warned: Action genre fans may be disappointed that is no big action. It is strangely classified as action.

Acting wise: Tom Cruise looks like he had lots of fun filming. It is just entertaining watching him immersed himself in the crazy and fast-paced world of Barry Seal. The rest of the cast are decent but not impressive.

Music wise: Christophe Beck created a decent mood of the different years. Since Doug wanted the film to feel realistic, it is not jam-packed with music. There are many moments where sounds and ambiance take the front seat.

Overall: It is not impressive but it is a solid entry to Doug Liman’s and Tom Cruise’s filmography. I went in with low expectation and had no idea about the outrageous stuff Barry Seal did. And not only was I entertained, I was immersed into the world of Barry.