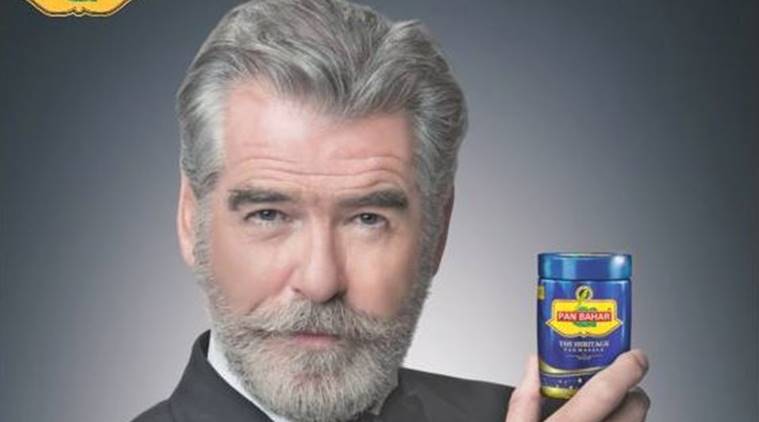 Pierce Brosnan, better known as the famous James Bond, gave a rude shock to  everyone when he starred in a Pan Bahar commercial. The ad was trolled on social media after it appeared on newspapers a week ago. The man who once defined style using his charm had now taken to Pan Bahar to look cool.

Pierce Brosnan Pan Bahar ad has now been banned from national and satellite television by none other than Central Board Of Film Certification Chief Pahlaj Nihalani.

In early April this year, in the interest of public health, the Delhi government’s Department of Food Safety issued a notification to ban all forms of chewable tobacco, including “gutkha, pan masala, khaini and zarda“, in the national capital.

“I haven’t seen the ad. But it is very difficult to believe Pierce Brosnan has done this. Money can hardly be a criteria when you’re selling death to people. However, he has chosen to do what he has done. But there is no way we can certify the ad. All paan masala, tobacco, alcohol ads are automatically and unconditionally banned, ” he told DNA.

Previously Pan Bahar had given this particular statement to The Indian Express:

“As we support our country’s ‘Make in India’ campaign, we are proud to have Mr. Brosnan on board and would like to thank him for lending his image for the short film of Pan Bahar and taking the brand to next level while making it classier with his elegance and style. There is rave on social media regarding the new (ad) however we believe there is lack of awareness about the product that Mr. Brosnan has done a short film for – a Pan Masala (Indian mouth freshener) which has Betelnut, Lime, Catechu, Cardamom seeds, Sandal wood oil, and Kewara in it and there is NO Tobacco No Nicotine content in this product. Also confirming there is no tobacco product under this brand name… attached (is) the certificate for the declaration of NO Tobacco, No Nicotine from the brand. We need to convey the same to media so that they are aware of the fact before publishing any negative comments.”

16 Creepy Photos That Will Make You Believe In Ghosts

10 Best Intelligence Agencies in The World 2016,