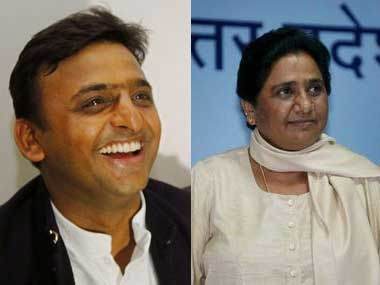 No chance of a UP grand alliance: It will be a BJP-BSP contest in the 2017 state polls

Bahujan Samaj Party supremo Mayawati has predictably shot down chief ministerAkhilesh Yadav‘s trial balloon of a mahagathbandhan to take on the BJP in the Uttar Pradesh assembly elections.

Though politics is known as the art of impossible, to expect Mayawati and Mulayam Singh to contest the election together would have been equivalent to the naiveté of imagining a snake and mongoose playing together. Mayawati is known for her ego and ambition, Mulayam Singh is infamous for his betrayals, backstabbing and even bigger ego and ambition; both of them depend largely on the same vote bank and fancy their chances of winning the next election on their own. No, Mayawati is the west of Lucknow politics, Mulayam its east and the twain would have never come together.

So, does their refusal to jump into the electoral bed guarantee BJP electoral bliss in the 2017 elections? Though it would be too early to predict the outcome of the assembly polls, three trends can be forecast with reasonable amount of confidence. One, the Congress is likely to be wiped out and reduced to a non-entity; two, the Samajwadi Party will lose a huge chunk of votes; and, three, the real fight would be between the BJP and the BSP.

On its own, the Congress is a marginal player in the state. In the 2014 Lok Sabha elections, the Congress vote share plummeted by almost 11 percent, falling to all-time low of a paltry 7.5 percent. Its performance wasn’t different from the trends since the 2007 and 2012 assembly elections, when it had secured around eight and 11 percent votes respectively, winning just around 20 seats in the state assembly.

Since 2014, the Congress has slipped further. Though there was limited scope for it, the party’s meagre electoral prospects have diminished exponentially. Its leadership is in disarray, cadres have disintegrated and vote bank has shrunk to the point of oblivion.

Since it became a marginal player in UP in the 1990s, the Congress has performed well just once — in the 2009 elections. That year, convinced that it will form the next government in Delhi and the BJP is out of the race, the minorities and upper castes voted tactically for the Congress in several constituencies, taking its vote share to around 19 and number of seats beyond 20. But that performance was an aberration, brought about mainly by the belief that it was destined to win. Unless something dramatic happens, the general impression is that the Congress is destined to be wiped out, and, thus, it is unlikely to retain even its 2014 vote share in the next election.

So, with the Congress out of the equation, the outcome of the election will depend on just one factor: how many of the anti-BJP voters abandon Netaji and line up behind Behenji. Whether the Congress contests alone or becomes part of an alliance is unlikely to make a lot of difference to the final result.

There is a caveat, though. Much as the BJP supporters love to see the Congress fall, its decline actually harms the NDA. In every election since 2013, it has been clearly established that the BJP needs the Congress — either as its principal adversary or a significant player in a multi-cornered contest — to win an election. Wherever the Congress is not in the fray, like in Delhi earlier this year, or is part of an alliance, like in Bihar a few weeks ago, the BJP finds it difficult to win the election. Obviously, a Congress-mukt election harms the BJP.

By now, the BJP must have realised that it does well in UP only when Hindu voters are polarised and there is confusion among Muslim voters, leading to their division. Both these factors helped it sweep the 2014 elections.

To win the 2017 elections, the BJP needs to ensure that it doesn’t lose too much of its nearly 43 percent vote share in 2014 in the assembly polls. Traditionally, the SP and the BSP have remained around the 30 percent mark. So, unless the BJP sees a drastic decline in its fortunes, it should be able to beat a divided opposition.

But there is a twist in the tale. With the SP facing anti-incumbency and the state’s nearly 20 percent minorities having tasted the fruits of tactical voting in Bihar, the BSP’s support base is likely to widen and that of the SP is expected to shrink in 2017, making Mayawati the face of the anti-BJP campaign.

In 2007, Mayawati had managed to win over the Brahmins of UP, considered to be around 10 percent of the electorate. If she manages to once again become the leader ofsarv samaj (Muslims, Dalits and Brahmins), instead of remaining the supremo of just the Bahujan Samaj, Mayawati could turn out to be the Nitish Kumar of UP, even without amahagathbandhan.

Ambience mall to organize ‘We Love Summer’ 2017 for kids

MOAB: 5 Things To Know About The Most Powerful Non-Nuclear Bomb In The World