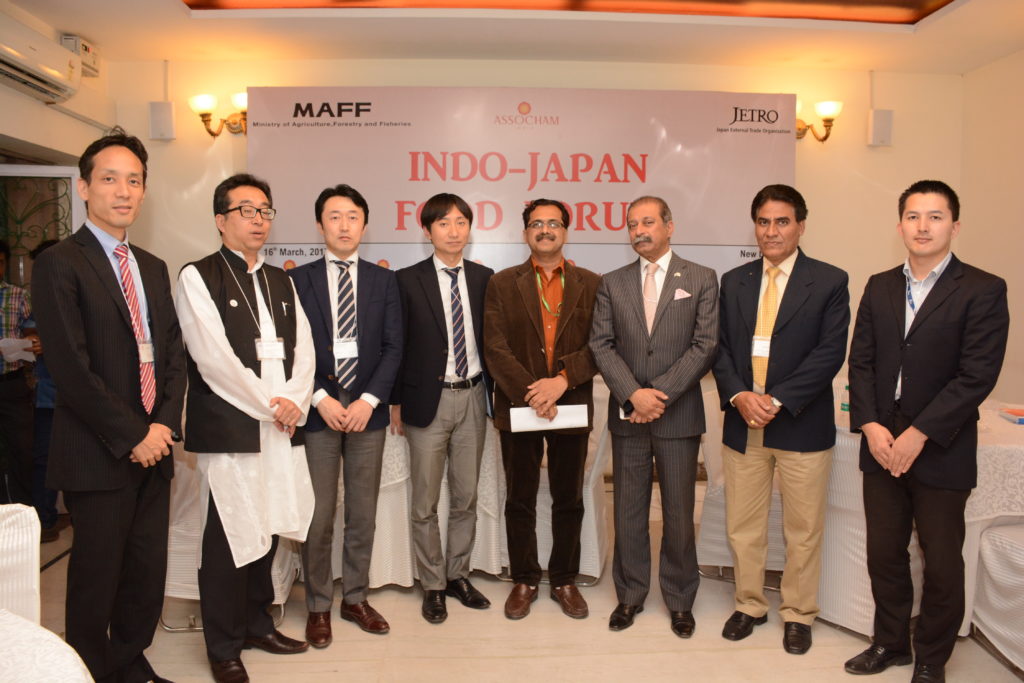 The Ministry of Agriculture, Forestry and Fisheries of Japan (MAFF) hosted their first Indo-Japan Food Forum on March 16th 2017 in New Delhi. The forum was co-sponsored by JETRO (Japan External Trade Organisation) and ASSOCHAM (The Associated Chambers of Commerce & Industry of India). The theme of the forum was ‘Food and Health’, and its prime objective was to showcase the strong advantages exhibited by Japanese food and technology, both in terms of taste and benefits to health. The forum also opened doors to Japanese food processing companies with advanced technology to invest in India. Speaking on the Indo-Japan Food Forum, Mr. Teramoto, Advisor to the Export Promotion Division of MAFF said, “The Indian economy has shown exceptional economic growth in the recent years. As the disposable income of the Indian population has been steadily growing, there has been a visible change in the dietary and lifestyle habits in the country. This has become a serious contributing factor towards obesity and various other diseases owing to the fast-paced lifestyles that we all lead. There are a lot of food ingredients and habits in Japan that could be beneficial in enriching the taste and improving Indian food habits. We believe that it is essential to take counter-measures to overcome these ailments and thus, we thought of bringing to India ingredients and proven food processing methods that have played a crucial role as advocates of health in Japan.”

He further added, “We are very happy to be collaborating with ASSOCHAM as they have been very kind and hospitable in helping us conduct this forum on their grounds. They have been a key player and contributor in making the Indo-Japan Food Forum a success.”

Referring to Mr. Teramoto’s comment Dr. Om S. Tyagi, Senior Director at ASSOCHAM said, “It is an honour to host MAFF at ASSOCHAM. The forum saw the presence of many industry experts and we learnt a great deal on the merits of the ingredients and preparation techniques of Japanese food. We believe that the knowledge that the Indo-Japan Food Forum has been able to spread today will certainly contribute towards improving the health and eating habits of many Indians.”

The forum saw the presence of distinguished chefs, government officials and members from known Japanese food processing companies. Also present at the event was Mr. Tejima, the Founder of Sushi Junction. He held a discussion where he spoke of his inspiration to enter the Indian market, the similarity and affinity between Japanese and Indian palates, and the growth of Sushi Junction here in India.