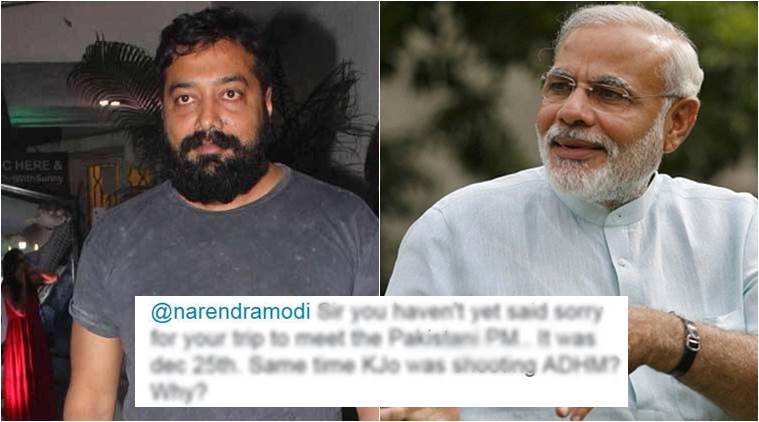 Film maker Anurag Kashyap, who has always been a vocal about issues related to Bollywood films, on Sunday tweeted to Prime Minister Narendra Modi, questioning him on his camaraderie with Pakistani Prime Minister Nawaz Sharif, while there is a growing demand for ban on Pakistani artistes. Referring to Modi’s sudden decision to fly to Islamabad on Sharif’s birthday last year, Kashyap said that the PM had not yet ‘apologized’ for the trip, while right wingers clamoured to impose a ban on Fawad Khan and other Pakistani actors and singers. Kashyap’s tweets were a show of solidarity with Ae Dil Hai Mushkil film maker Karan Johar. The film’s release has been threatened as distributors and cinema complex owners have all jumped on the ‘nationalistic’ bandwagon.

“@narendramodi Sir you haven’t yet said sorry for your trip to meet the Pakistani PM.. It was dec 25th. Same time KJo was shooting ADHM? Why?”, Kashyap tweeted on Sunday morning, adding sarcastically, “Btw Bharat Mata ki Jai Sir @narendramodi”. The producer film maker had on Saturday lashed out at those demanding a ban on Ae Dil Hai Mushkil, pointing out the irrationality behind the ban. “The World must learn from us.. We solve all our problems by blaming it on movies and banning it.. #ADHM . With you on this@karanjohar”, Anurag Kashyap tweeted yesterday. His tweet had come after the Cinema Owners Exhibitors Association of India (COEAI)  announced on Saturday that they will not be screening movies starring Pakistani artistes, in four states- Maharashtra, Gujarat, Karnataka and Goa.

Kashyap has been joined by many cinema stalwarts in raising his voice against the ban on Pakistani artistes. Om Puri, Shyam Benegal, Vikram Bhatt, Mukesh Bhattand even Censor Board Chief Pahlaj Nihalani have spoken out against the ban. Meanwhile, Bollywood’s Pakistani import, singer Adnan Sami had criticised Pakistani artistes for remaining silent instead of condemning Pakistani attacks on Indian soil. Many right wing political parties and organisations have demanded for a complete and irrevocable ban on Pakistani performers. Pressurized from all sides, Fawad Khan and Mahira Khan- who stars opposite Shah Rukh Khan in Raees- had earlier this month issued separate statements condemning terror.

Kashyap’s tweets were obviously not very well received  by some of the Twitterati, who were quick to reprimand him and point out that the PM should not be blamed for the actions of a Film Association.

Karan Johar’s ADHM stars Pakistani super star Fawad Khan, along side Anushka Sharma, Ranbir Kapoor and Aishwarya Rai Bachchan. Khan has a huge fan following in India as well and his film Kapoor and Sons has been a huge hit. The film is set to release on October 28 and has been eagerly awaited by fans.