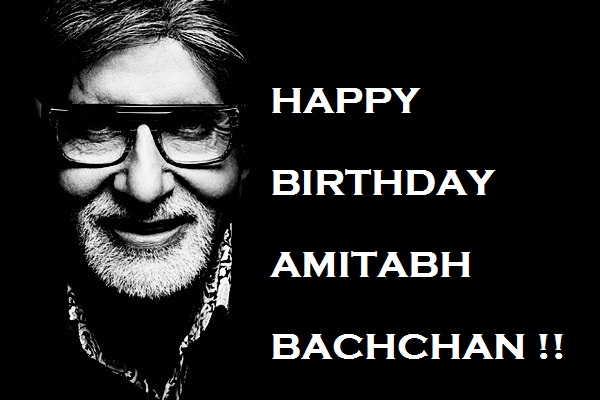 Legendary actor and iconic personality Mr. Amitabh Bachchan continues to awe, awe and awe! The Big B (as he’s fondly called), needs no introduction .We list 20 things that make Big B Special among all :

1. Baritone voice- Amitabh Bachchan is known for his baritone voice and although he was rejected by All India Radio as an RJ (Radio Jockey), this turned out to be a blessing for Bollywood. He’s been a narrator (for Satyajit Ray’s Shatranj Ke Khilari and the Oscar-winning French documentary March of the Penguins) and a playback singer (Sharaabi, Khuda Gawah, Paa. Kahaani, Bol Bachchan and Silsila to name a few)

2. Legendary actor- With a career spanning four decades, Amitabh Bachchan has worked with the best directors and co actors in the Indian film fraternity. He has award winning performances to his credit and his films like Amar Akbar Anthony, Namak Haraam, Deewar, Anand, Abhimaan, Sharaabi and Sholay watched till date. His hits like Agneepath and Don have been remade but none match the originals! He was the ‘Superstar’ of Indian cinema for a quarter century before his down fall.

3. Big come back- Kaun Banega Crorepati is said to be the saving grace in Amitabh Bachchan’s career. At a time when he was in huge debt and forgotten by the industry, KBC’s offering in 2000 came as a blessing! As KBC’s host, he was an instant hit with masses! It reinstated his position and career and went on to recreate the phenomena called Amitabh Bachchan.

4. The best host on TV- His debut with Kaun Banega Crorepati as TV host brought him back to prominence. Now in its 8th season, no host has been as popular or loved by audiences as much as AB senior.

5. Fighter- During the shooting of Coolie in 1982, he had a near fatal accident while shooting a fight sequence with co-star Puneet Issar. He condition was termed critical and he spent many months in hospital. He was even close to death but chose to fight and with the well wishes of family and close friends, he bounced back to life. This was christened as his re-birth.

6. Professional- Come hail or storm, Amitabh Bachchan lives up to his commitments. Out of the many incidents, the particular one that comes to mind is during the shooting of the film Sharaabi where Amitabh Bachchan burnt his hands. But being the professional he is, he continued to shoot by putting his hand in his coat pocket which went on to become a fashion statement in itself!

7. Beyond regionalism- Amitabh Bachchan is promoting tourism for three states in India including Uttar Pradesh, Gujarat and Kerala. This goes on to prove that the lad from Allahabad does not differentiate between different states and cultures. This is a sign of a genuine leader.

8. Dislikes term Bollywood- Big B dislikes the term Bollywood. In an interview given to a known media house, he went on to say that the word Bollywood sounded like an abuse and was demeaning to the Hindi film industry

9. Social responsibility- Amitabh Bachchan has always been a conscientious citizen and his support for UNICEF`s Pulse Polio campaign had a huge impact on the country, eradicating polio to a large extent in India. He was also the face of ‘Save Our Tigers’ campaign that promoted the importance of tiger conservation in India. As the host of Kaun Banega Crorepati, he’s promoted different themes through the seasons including the latest, “Sirf gyan hi aapko aapka haq dilata hai”. All his efforts are truly lauded.

10. Generous- It is a known fact that Big B worked for free for friend Shashi Kapoor’s directorial debut, Ajooba. Rohit Shetty had also said in an interview that Big B had really helped him when his father had passed away. It was his friendship with Rajiv Gandhi that prompted him to run for a seat in the Congress from his hometown. Even in KBC, as a host, he is always worried about contestants choosing the wrong answer and always asks them to re think before locking their answer. This has changed the decisions of many contestants who have gone on to become crorepatis.

12. Humility-As the Shahenshah of Bollywood who has been in the film industry for four decades, Big B is as humble as one can be. Whether it’s with his co-stars, junior actors, newcomers, audiences and fans, he greets all of them equally! He has also taken the ups and downs of life with grace and challenged them, and never let success or failure change him as a person.

13. Superstar- After Rajesh Khanna, Amitabh Bachchan was the second superstar of the country. But with the sad demise of Kaka (Rajesh Khanna), Big B recently Tweeted, “The word ‘superstar’ was invented for him, and for me it shall ever remain his and no others”. We appreciate the humility.

15. Adapting to young directors- Big B is known to work well with the new age directors without meddling in their affairs. He’s known to respect their art and craft and has worked wonderfully well with directors like Karan Johar, Shaad Ali, Apoorva Lakhia, Samir Karnik, Farhan Akhtar and Kaizad Gustad.

16. A global citizen- He was conferred with the Honorary Citizenship of the French town of Deauville in 2003. He was also honoured with an Honorary Doctorate from the Leeds Metropolitan University in Yorkshire, UK, the De Montfort University in Leicester, UK and the Queensland University of Technology in Brisbane, Australia.

17. His chemistry with Rekha- His onscreen chemistry with co-actor Rekha sparked of many rumours that went on to link the two together. Big B was married to Jaya Bachchan then and the iconic film ‘Silsila’ is said to be inspired by this love triangle. Rekha and Amitabh were seen together in films like Do Anjaane, Silsila, Suhaag, Muqaddar ka Sikandar and Mr. Natwarlal. Till date, the camera pans on Amitabh and Rekha at all award functions.

18. International superstar- France’s highest civilian honour, the Knight of the Legion of Honour was conferred on him in 2007. He was also voted as the “greatest star of stage or screen” in a BBC Your Millennium online poll in 1999. It was in the same year that Big B was voted for the Actor of the Century award at the Alexandria International Film Festival in Egypt in recognition of his contribution to the world of cinema. He also won the Lifetime Achievement Award at Asian Film Awards in 2010.

19. Highest Awards and honours- Filmfare awards, National awards, Wax Statue at London’s Madame Tussauds Wax Museum, Honorary doctorates, the Knight of the Legion of Honour. Phew! This list can go on and on.

20. Awe inspiring energy- It’s amazing the amount of work that Mr. Bachchan can do with multiple shoots, endorsements and various other commitments. Actor Ajay Devgn claims that it was Big B’s energy that motivated him to shoot even when he was unwell. “I was unwell and we started shooting for Bol Bachchan song with Mr. Bachchan. When I reached the sets, I had no energy to shoot but I saw Mr. Bachchan being energetic on the sets even though he was not in the pink of health. In fact, people told him not to strain too much as he was not keeping well, but Amitji continued to shoot. It motivated me so much that even I completed the shoot without any complain,” says Ajay. Adding, “At this age if he can be so hard working, why can’t we? He is surely a source of inspiration”.

5 reasons why we can’t wait to watch MS Dhoni: The Untold Story

Brangelina Split!Brad Pitt and Angelina Jolie to divorce after 12 years together