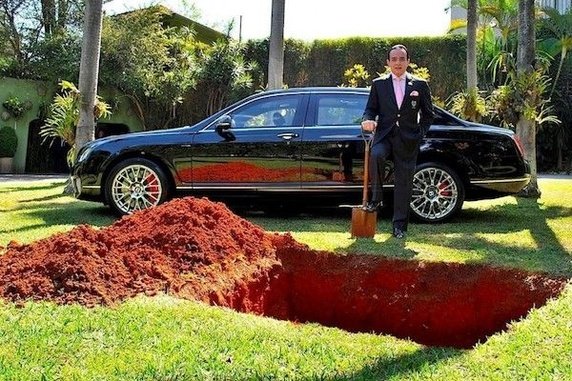 A millionaire in Brazil, Chiquinho Scarpa had announced that he is going to bury his Bentley car costing him 1 million dollar.

The reason he attributed was that it will be useful for him after his death. As he could drive around the afterlife in style. He received lots of media attention and was criticized for the extravagant gesture.

On the specified date all the media were assembled there eagerly to see what is going to happen.
A big pit was dug to accommodate the car. The car was parked nearby. All were watching anxiously. The millionaire came. Arrangements were made for burying the car. People scolded him for his foolishness.

“You are wasting the costly car. It will not be useful to you after your death. Why can’t you give it to somebody else so that they can use it.”

The millionaire replied with a smile, to reveal his genuine motive:

“I am not a fool to bury the car. I wanted to convey a message to you. The car is just One million dollar. You are angry with me as I have decided to bury it.
But you people are burying the cost less heart,eye,lungs,kidney, skin etc which are useful to the human community. Why can’t you gift them to the needy. Millions are awaiting for organ replacement. Help them. I staged this drama so as to make you to realize the importance of organ donation.“

Are the Illuminati real?