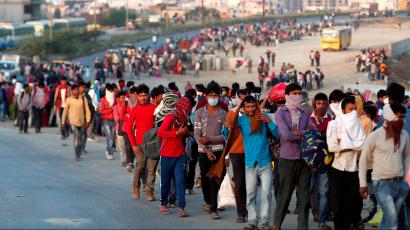 India went into a lockdown on March 25 that was first announced to last 21 days. At the time of the announcement, Prime Minister Narendra Modi failed to mention migrant labourers or arrangements for their safe stay or travel. Industries, shops and transport were to be shut, making migrant workers panic about how to keep the roof over their heads and put food on the table.

The trepidation brought thousands to the streets and the fear of the virus spreading to them and from them to healthy people in rural areas, made the government sit up and take notice. There on, shelters were set up and announcements about how their basic necessities would be taken care of were made.

While relief from the government was slow and inadequate, these workers were provided for by the members of the civil society. Yet, their fear and dismay and the longing to be with their families remained. They sat tight till April 14 in hope of the lockdown being lifted on April 15, after which they could be reunited with their families. However, the extension of the lockdown till May 17 and beyond, set off their latent anxiety turning it into full blown panic.

As per the Indian Labour Organization, 90 percent of India’s workforce is employed in the informal sector. They are employed as rickshaw drivers, plumbers, construction workers, domestic help, security guards, fishermen among many other professions. And the problems of these migrant workers in cities are manifold. Staying in cramped rooms, using communal toilets, issues of rent, lack of potable water, inability to get cooking fuel, etc. have been hounding them since the lockdown has begun.

Migrant workers are like always pushed to the sidelines by the government in India and these incidents that have taken place over the last few days are only testimony to that fact. Their numbers may be in millions, but as The Atlantic puts it, they have no political clout. Welfare services for people below the poverty line are generally only available at their place of birth. With migrants moving between cities, they can rarely access these schemes for their benefits.

“During this time of COVID-19 these migrant workers are not sure and a sense of panic has come up. They do not know when their normal jobs will resume, they do not know how many of them will get back their routine jobs. Money is a big issue since most of them are depending on daily wages that source of income is either stopped or not reaching them. Without money, they neither can buy food nor can they afford to pay their rents. Though several state govt has ordered not to charge any rent for specific duration still their minds are going through an unknown fear. Since these migrant workers also stay away from their families and native home town for a longer duration of their lives. There is a certain panic that has occurred inside their minds as well because they do not know if certain people will survive for the coming days or not?”

It is clear that the patience of the migrant workers is running out fast. Their desperation to be home with their families, stay safe and provide a dignified life to themselves and their kin back home is leading them to believe every hoax out there that provides them even a little bit of hope about them being able to return home.