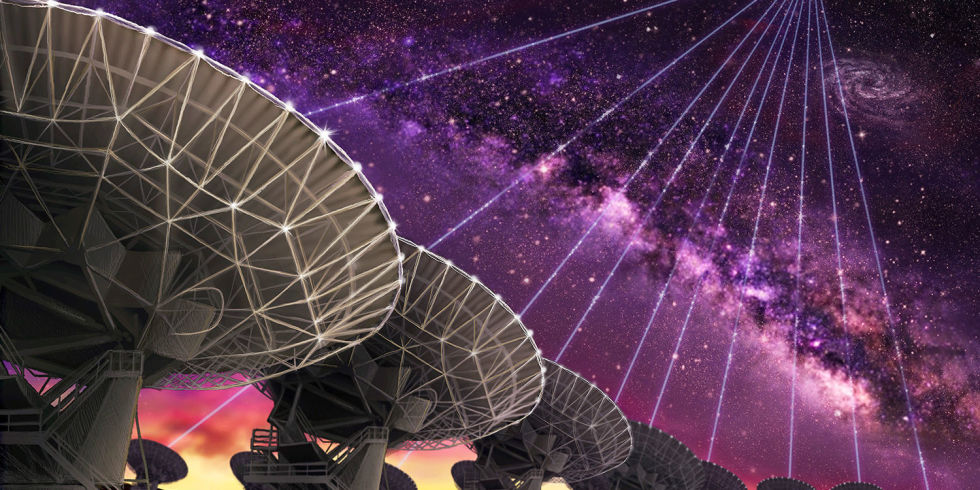 In 2007, a group of astronomers spotted something strange—a powerful burst of radio waves that vanished as quickly as it appeared. They called the strange event a “fast radio burst,” and ever since then scientists have been trying to figure out what these things are.

Here’s what we do know: Fast radio bursts are high-energy radio signals that last a few milliseconds. Sometimes those signals repeat, months or years apart. A few months ago, astronomers figured out the burts were coming from galaxies billions of light-years away. But the biggest question of all is still unanswered: What’s causing them? There are plenty of theories, from the far-fetched (aliens) to the mundane (collisions between pulsars or strange interactions between black holes). But nobody knows for sure, and the real source might be none of the above.

The Breakthrough Listen team used the Green Bank Telescope to observe FRB 121102, which was first discovered in 2012. At the time, it was one of only a handful of fast radio bursts ever discovered, and a few years later, in 2015, it was the first such burst astronomers spotted repeating. In 2016, astronomers tracked its origin to a dwarf galaxy about 3 billion light years away.

On August 26, the Breakthrough Listen team spent five hours observing FRB 121102, collecting more than 400 terabytes of data. The Green Bank Telescope allowed the team to observe the radio burst over a larger range of frequencies than previous telescopes, and the astronomers found the signal was stronger than they expected at higher frequencies.

While that discovery doesn’t solve the mystery by itself, it is an important clue. The sheer volume of data collected by the Breakthrough Listen team will be invaluable for scientists trying to puzzle out the source of these fast radio bursts. And who knows, maybe it could be aliens after all.

What are some mind blowing myths that sound like truth but are actually false?