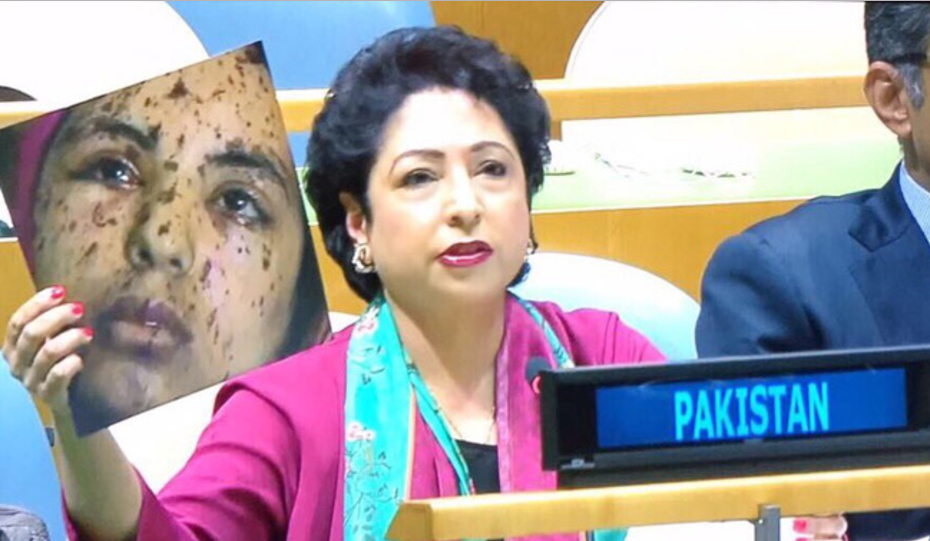 In order to malign India, Pakistan’s ambassador to the UN Maleeha Lodhi used a fake image of a “pellet gun victim” in the UN General Assembly for alleged atrocities in Jammu and Kashmir. The move backfired as it was later emerged that the image was that of a 17-year-old Gazan woman named Rawya abu Jom, who had been injured by shrapnel during an airstrike by Israeli forces.

Lodhi, while blasting India for “appointing a fascist government”, also misquoted Arundhati Roy, “As one of India’s most famous contemporary authors recently said and I quote ‘These horrific murders are only a symptom. Life is hell for the living too. Whole populations of Dalits, Adivasis, Muslims and Christians are being forced to live in terror, unsure of when and from where the next assault would come’.”

No need to surprise about Pakistan Quotes Arundhati Roy. Its expected. In-fact last year, Pakistan Assembly suggested to invite her over J&K

In response to Sushma ji’s slap, Pak quotes Arundhati Roy words “India not safe for minorities”. Great service to her nation by Arundhati

We must learn from Pak. Arundhati Roy would have been tried for blasphemy & hanged in Pak But Liberal Indians promote her as Messiah of FoE

“All governments and their spokespersons are opportunistic. That cannot become a reason for writers and journalists not to write what they have to write,” Roy told Outlook on Sunday.

It is common for the right-wing in both India and Pakistan to accuse domestic critics of human rights violations of providing political ammunition to the other side. Like Roy and others in India, the journalist-diplomat Hussain Haqqani has been accused of undermining Pakistani national interests by his views on Balochistan.

Ambience mall to organize ‘We Love Summer’ 2017 for kids