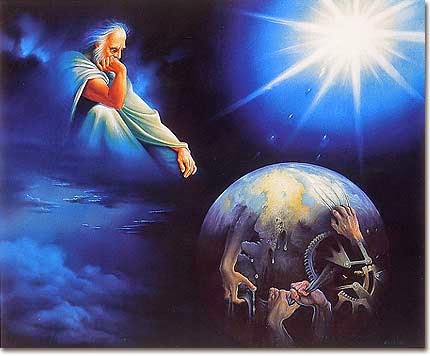 Barbara Walters once said It would be nice to feel that we are a better world, a world of more compassion and a world of more humanity, and to believe in the basic goodness of man.

Is it Possible to make a world that we all believe in?

This world is full of wonderful things. But there are also a bunch of irritating, useless and idiotic things that make you want to wish you could make them disappear

I would not just sit in the background. I would play an active role in my creation, building great things, and constantly influencing the world to make it more and more obvious that I existed to my people while also creating false gods, prophets and the like to encourage rival factions. I’d build this world with the intention of creating a number of groups who would eventually go to war. At this time I would appear on my simulated planet and begin granting super powers to all sides of the conflict.

I would make sure my creations knew that Right doesn’t come from me. While I would have power over them, I would not want them to accept my authority, as only they are in a position to determine what is right by them.I will establish a set of rules that man should live by though don’t necessarily have to. If they don’t live by it, there will be no personal relationship with me. If they do, they will spend an eternity with me, giving me new ideas for situations and creations.

Some nations provoke youths to become terrorists in the name of religion. But it is important to understand that no religion encourages killing of the innocent people.

I’d change the human evolutionary past to make them better able to understand the impact of their actions on others. In broad terms, humans have evolved to look after a small group of people that they feel loyalty to (your family, your nationality, or your religious group. We all simply don’t think of this because our brains haven’t evolved to cope with it – I’d love to change that.

I would get rid of disease, and ensure that there were enough resources for everyone to live happily with no suffering. I would also probably limit our reproductive rate so the earth doesn’t become overpopulated